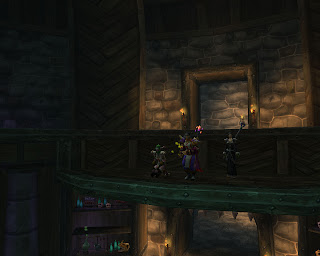 Friday's ex-tempore laughter run: priests against Shadowfangs. Actually, it was three priests against Shadowfang Keep and Archmage Arugal. The three were Bishopgeorge, Pupunen and Flimsy, for whom the run was a real boost in gear. Robes of Arugal serve a caster for a quite long time, and is currently extremely easy to acquire.
Which reminds me of one certain thing. Because of the fact that Shadowfang Keep is deep in Silverpine forest -and "Horde Territory" as Flimsy put it- it is pretty hard to reach at the correct level range and thus is much neglected by the Alliance. As is Wailing Caverns, which serves the Hunters and Rogues with similar love as Shadowfang Keep serves the caster classes.
This is a shame, and I think it's the most obvious sign that people are levelling just to get high and fast: sadly I have to admit that I have resorted to the similar thinking with Laiskajaakko recently.
Now The Order of the Fist has a nice base from which to form the runs, so it would be easy enough to run these instances in a succession.
And it doesn't mean a thing if the Instance is in contested area: heck, people are running Ragefire Chasm by Alliance toons and Stockades by Horde toons! Ask them if it matters!
Achievements don't make that separation.
Besides, it's fun.
A post by Unknown