Stooges with a headache

Despite Tobold trying to explode my visitor counter, I will stick to the schedule I have now established on my mind.

Yesterday was yet another Three Stooges night. The holy trinity of warrior (lv83), priest (lv84) and rogue (lv84) entered Stonecore with all the confidence in the known world to overcome their nemesis from the earlier attempt: Ozruk. For the record, we still feel - even more so - that this instance is easy for a full group, let the composition of the group be anything. If we can do it with such an ease as far as we do, the a full group should just do it.

Corborus was really a pushover and Slabhide was just another boss dragon with it's own dance moves. In the end, the trash mobs provided more entertainment value due to their uncanny way of getting some adds to the fight. This one ability proved to be the one we couldn't later overcome.

But let's continue with the dungeon delving.

After Slabhide there comes the passage with the mobs and sentries. Nothing strange in there, kill the sentries as fast as possible or face the consequences: they call ALL the mobs to protect the High Priestess. Carefully we disabled the ones which might have caused any further trouble (or so we thought) and faced our nemesis. 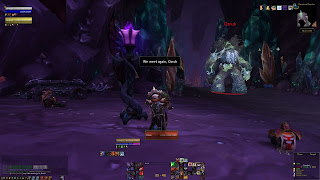 We banged our head on this rocky fellow time and again. Running around like chicken in heat. Pulling those extra mobs while running from the Slabhide teleporter, the ones we thought wouldn't cause any trouble. And wiped once more.

Until this one particular warrior, Laiskajaakko (his player, in fact), suddenly had an realization that you do not have to run from the Ground Smash, just side step. So instead of running around from the Shatter Blow and Ground Smash, you have to pull away only from the first and NOT MOVE OZRUK.

Stupid player that guy. Heard he's writing a blog or something. Real git.

All this and some more, the next try resulted. 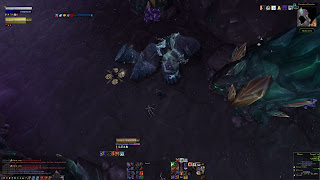 Yes, Ozruk was down. And the only reason it took us so long was this stupid tank person who couldn't read the signs and interpret the graphics on this fight.

On we went, through the meaningless bunch of the Cultists, until we met Her. 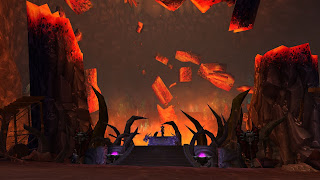 High Priestess Azil. The fight is really a simple one for a bigger group, as ranged dps can do her damage all the time. We - on the other hand - are lacking two dimensions of dps in our group: ranged and area. Both of which would be nice to have in this one, making life just a bit easier.

Needless to say, this fight is messy and not too satisfactory. 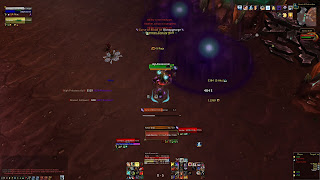 And the conclusion pretty clear. 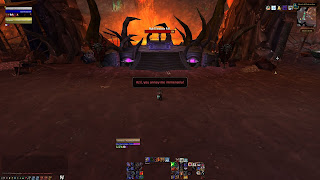 In short: the Three stooges are lacking some serious damage dealing on Azil, and our tank has to learn more about grabbing the aggro from the healer. The major cause to the headache resulting wall banging was the fact that the healer was being pounded by the Cultists, while the tank was being Power Gripped and unable to say "Cheese!". The main reason for the frustration on High Priestess Azil encounter was the fact that no changes we made to our approach gave us any noticeable advance in the encounter: everything we did to change the result was in vain. On Ozruk we saw from the beginning the problems and could work on them, but here... nothing sticks. It just bugs the living daylights from us.

Like the song goes, she bangs, she bangs. But not for long, for as Förgelös (the rogue) said...

WE WILL OVERCOME, AZIL!
.